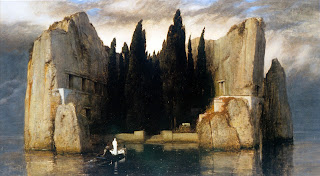 Sergei Rachmaninoff’s symphonic poem, “Isle of the Dead,” was inspired by Arnold Böcklin's ultlra-romantic painting of the same name, which the composer saw in Paris in 1907. Rachmaninoff continued to work on the orchestral score for “Isle” for several months before conducting its premiere in Moscow, but the inspiration for it came suddenly, in a spontaneous effusion of sound:

“When it came, how it began—how can I say? It came up within me, was entertained,written down.”

Bach’s organ masterwork, the “Toccata and Fugue in D Minor,” has become a pop culture standard thanks to its use in film scores (Disney’s Fantasia, Rollerball, Quartet).

The celebrated piece also seems to have been an improvisation—or, more correctly, a later transcription of an improvisation. Parts of the “Toccata” especially have reminded music scholars of the sort of passages “used when testing organs.”  But the “Toccata and Fugue in D Minor” is not just a series of flashy keyboard sequences. From its opening flourishes to its final tectonic coda, the work develops and unfolds with an unrelenting momentum.

It sounds, to me, almost like a musical working-out of the Big Bang theory of Creation.

Where does such transcendent inspiration come from? Like many other “canonized” composers (almost any of the classical names who come to mind), Bach acknowledged a spiritual source.

"At the beginning of his manuscripts Bach would write I.N.J (In Nomine Jesu-'In thename of Jesus') or J.J. (Jesu Juva-'Jesus Help Me'). He would then inscribe SDG (Soli Deo Gloria-'To God alone, be the glory') on the last page."

I learned to love the “Toccata and Fugue in D Minor” not from Stokowski's lush orchestral transcription in Disney’s Fantasia, but as performed with panache on a piano by a dear friend, the late James Sewell.

Jim was a gifted pianist with considerable technique and showmanship, but equally remarkable as a composer, painter and scenic designer.

He told me once where he got his ideas, both musical and visual. Like Rachmaninoff (though Jim did not pretend to be of that artistic caliber), he first “heard” the music that he later transcribed for the keyboard. Likewise, he “saw” paintings in his mind as finished works, and often could analyze (with the other half of his brain) the technical steps and brushwork necessary to create the envisioned effect. Jim told me that he had perhaps hundreds of pre-visualized paintings in his mind, most of which he never got around to executing.

Jim Sewell was a preacher’s son, and it was his abiding joy to serve for many years as art instructor and studio assistant for one of the most inspirational artists of our time, Joni Eareckson Tada.

To quote her website (Joni and Friends International Disability Center), “A diving accident in 1967 left Joni Eareckson Tada a quadriplegic in a wheelchair. Today, she is an internationally known mouth artist, a talented vocalist, a radio host, an author of 17 books and an advocate for disabled persons worldwide.”

A Rennaisance woman—“but not quite,” she adds. “I don’t tap dance. One of these days, yes, but not quite.”

It is hard to imagine an artist who has overcome greater challenges than Joni has. For this, and everything she has achieved in her miraculous life, she gives thanks and glory to God.

The same acknowledgment is met again and again in studying the lives of great writers, 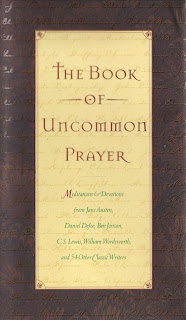 painters, composers, musicians. This artistic humility—genius on bended knee, as I call it—was one of the impelling ideas for an inspirational anthology my wife Connie and I put together, The Book of Uncommon Prayer. In it we assemble the prayers and devotions of famous writers and poets—prayers written not for publication in many cases, but private or household use.

It’s an exalted lineup, from Louisa May Alcott and Jane Austen to Walt Whitman and William Wordsworth, with more than fifty beloved names in between.

Give honor unto Luke Evangelist: / For he it was (the agèd legends say) / Who first taught Art to fold her hands and pray…
Posted by Dan Pollock at 8:17 AM