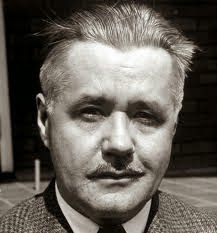 When it comes to my taste in books and music and art, I am, I confess, a contrarian. If I’m reading a best-selling novel, it’s far more likely to be from the 1950s than the current “hot” title by Donna Tartt or Ian McEwan or [insert name of currently incandescent author here].

Perhaps you, too, might have the makings of a curmuedgeon or anti-trendarian. Try this experiment. Google up a best-selling fiction list from the ‘50s or earlier decades and sample an offering or two. Check them out at your library or “Look Inside,” if the titles in question are available on Amazon, and see how long it takes for you to be seduced by the narrative charm of an earlier generation of storytellers. 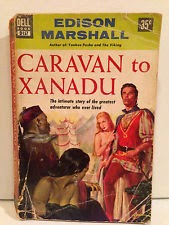 Today’s example, Edison Marshall, was a perennial on U.S. best-seller lists from the '20s through the '50s. Forty years is a pretty good run at the top of the literary heap for any writer, and Marshall, who specialized in adventure and historical fiction, worked hard to get there and stay there.

But let him tell it:

“Living in Augusta, Georgia, not only out of the world but out of my times, avoiding New York, Hollywood, and all contacts and pressures that could breach my dreams (a social delinquent if one ever was), reading poetry and biography but no novels but my own, fishing or shooting three days a week with a soft-voiced, dark-skinned attendant-companion, I hope to write vigorously for two more decades. If so, I will have made something like a record—more than fifty years of good living from my pen alone, and a long lifetime spent at absolutely no other (except a year's soldiering) gainful occupation.”

Despite avoiding Hollywood, Marshall enjoyed some major book-to-movie sales. Benjamin Blake, a historical romance set in 18th century England, was twice made into films—in 1941 by Fox as “Son of Fury” starring Tyrone Power; and in 1952 with Cornel Wilde as “Treasure of the Golden Condor.” Jeff Chandler starred in 1954’s “Yankee Pasha” about America’s war with the Barbary Pirates, and “The Vikings” was a 1958 box-office smash pairing Kirk Douglas and Tony Curtis.

There’s an interesting parallel between the solid financial success achieved by Marshall over his long career and that of Dickens. As boys, both endured episodes of grinding poverty due to their fathers’ financial reverses, and both vowed, like Scarlett, never to be hungry, or poor, again when they came of age.

Again, to quote Marshall, “…the cold wind of poverty rattled the windows and gave us the scare of our lives. I resolved that whatever I did in life, first and foremost it must make us a bountiful living… I went after the two big prizes, fame and fortune, and I got them both.”

Edison Tesla Marshall (named after the two feuding giants of electricity)—well worth rekindling.