“Bucket List” seems to have entered the popular consciousness with the 2007 Rob Reiner movie. It starred Jack Nicholson and Morgan Freeman as two terminally ill men on a road trip, pursuing a wish list of things they wanted to do before kicking the bucket.

But the Ultimate Bucket List, in my view, was created on a rainy afternoon back in 1939 by a 15-year-old boy daydreaming of great deeds and faraway lands. Young John Goddard worked on his “Life List” (you can peruse it here) until he’d drawn up “127 goals he wished to experience or achieve in his lifetime.”


He wanted to explore the waters of the Amazon, the Congo, the Colorado and the Nile rivers. He hoped to climb an impressive list of mountains, including Mt. Ararat in Turkey, Mt. Cook in New Zealand, Mt. Popocatepetl in Mexico and Tanzania’s Mt. Kilimanjaro. He wanted to visit the Great Wall of China, the Panama Canal and Suez Canals, Easter Island, the Galapagos Islands and the Taj Mahal.

That’s from his obituary in the May 22 Los Angeles Times. John died May 17 at the age of 88 of

a rare form of cancer. But he exited having completed more than 100 of those 127 life goals.

Many, by the way, were far more audacious or difficult than those cited by the Times obit. A few examples:
I had the privilege of knowing John Goddard. He was an elegant gentleman, personifying for me the Victorian adventurer, as at home in drawing room as the jungle. In this he was in a direct line of romantic and intrepid adventurer scholars—Sir Richard Burton, Sven Hedin, Richard Halliburton, Charles Doughty, Fridtjof Nansen, Thor Heyerdahl, Wilfred Thesiger.

Predictably, Goddard has been called a “modern Indiana Jones,” a title he shared with contemporary explorer-adventurer, Dr. Jack Wheeler, another grownup Eagle Scout (like Goddard) who has climbed the Matterhorn, among many other exploits.

I confess to having made my own life lists, usually after a flute or two of New Year’s champagne. Looking them over in later years, I find very, very few checkmarks in my ballot boxes. On John’s list, on the other hand, unchecked boxes are rare. True, he never appeared in a Tarzan movie (No. 93) or visited the moon (No. 125), but let’s give him a pass on those, shall we?

“When he was growing up, he heard older people say with regret that they hadn’t done the things they wanted to do,” his son said this week. “He decided he was going to live a life of adventure so he wouldn’t have any regrets.”

The only real consolation for growing up (someone once told me) was the opportunity to fulfill one’s childhood dreams. To me, John Goddard embodied that quest, and I suspect he had very few regrets when he finally closed his eyes on his lifelong dream.

And I know, if I'll only be true
To this glorious Quest,
That my heart will lie peaceful and calm
When I'm laid to my rest.

PS. For the interested, I see there has sprung up a social network website where you can keep track of your personal bucket list, add videos and images, and read about others’ adventures.
Posted by Dan Pollock at 12:38 PM No comments: 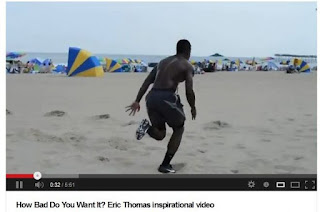 One of the most powerful motivational speeches blasted out of my car speakers the other day. I was driving my teenage son to school, and, as usual, he’d plugged his iPhone into the dashboard.

I thought he’d selected the wrong track from his wall-to-wall hip-hop playlist. A deeply resonant black voice launched into a story about a young man seeking out a “guru” to learn how to make a lot of money.

I glanced sideways. My son was actually listening, so I listened also. Oh, well. Whatever this guy was getting worked up about, it couldn’t be as distasteful as the nasty hip-hop lyrics I’m forced to endure. (My son swears he hears only to the background music.)

The secular sermon was a bit belabored, with a lot of repetitive phrasing and cadences, slow to reach its predictable crescendo. But when the guy finally got there, I found myself unexpectedly galvanized by the simplicity and force of his message. 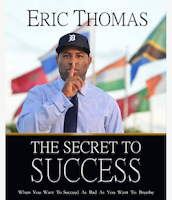 Spoiler Alert: Before I write any more, you might prefer to give it a listen. The motivational speaker is Eric Thomas (about whom I know nothing), and you can find his “rant” with a web search of “How Bad Do You Want It?” Or use this link.

Now that you’re warned, I’ll cut to the chase. The young man meets the guru at the beach and is walked out into the water till their heads are barely above the waves. Suddenly the guru pushes the young man’s head under water and holds it there for… well, for  a heckuva long time in the story:

“He had him held down, just before my man was about to pass out, he raised him up. He said: ‘I got a question for you.’ He told the guy, he said: ‘When you want to succeed as bad as you wanna breathe, then you will be successful.’”

That’s it, the moral of the story. It’s not enough, according to Eric Thomas, to just “kind of want to succeed.” You have to want it as much as a drowning man wants to breathe. Anything less won’t cut it.

And, you know, that really resonates with me—and with many thousands of others, including my usually blasé  son. I suspect because it’s true.

A wise man—a guru of sorts—told me once a deceptively simple thing--that life is a crisis. A continuing crisis, in which, by our choices, we define ourselves moment by moment, day by day.

The trouble is, we seldom perceive this ongoing crisis. Except when we get the big, obvious theatrical clues. Then it's inescapable.

Like at the final hand at the poker table, when all the chips get pushed to the center and it’s showdown time. 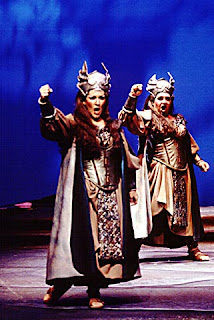 Or in the opera’s last act, when the trumpets sound and the timpani rumble and the Fat Lady gets ready to sing.
Or when we are plunged beneath the weaves and have to fight upward for oxygen.

The trick is to see the crisis when no one else around you does—and to respond with extraordinary effort under seemingly ordinary circumstances.

But Eric Thomas says it better:

“You gotta go days without – LISTEN TO ME! You gotta want to be successful so bad that you forget to eat... I never forget, I went, 50 Cent was doing his movie, I did a little research on 50, and 50 said that when he wasn’t doing the movie, he was doing the soundtrack. And they said: ‘When do you sleep, 50?’ and 50 said: ‘Sleep? Sleep is for those people who are broke. I don’t sleep.’ See I got an opportunity to make my dream become a reality. Don’t cry to quit. You already in pain, you already hurt. Get a reward from it. Don’t go to sleep until you succeed.”
Posted by Dan Pollock at 6:28 PM 1 comment:

In a previous post (“Art as a Job,” Thursday, February 28, 2013),  I did a quick survey of some of the world’s most prolific novelists. Shelf-fillers Georges Simenon and John Creasey came in for honorable mentions, along with Isaac Asimov and R. L. Stine.

Somehow I missed the Guinness-certified record holder for most published titles, a Brazilian pulpmeister known as Ryoki Inoue. In fact, according to a 1986 Wall Street Journal profile,“When the Guinness Book of World Records recently affirmed Mr. Inoue's No. 1 ranking in titles published, the award certificate was already 15 books out-of-date by the time it arrived from England.”

How fast can Inoue write (yes, he’s still at it)? Again to quote the Journal, “He has churned out complete chapters during trips to the bathroom; a whole book while having his truck worked on in a garage; a novel and its sequel in an afternoon on the beach.”

When the WSJ story was published in 1996, Inoue had published 1,039 books—under his own name and 39 pseudonyms. “Mr. Inoue writes books faster than 10 Brazilian pulp presses combined are able to publish them. ‘Brazil hasn't yet developed the capacity to absorb me,’ says the pipe-smoking 49-year-old author, whose father was Japanese and mother was Portuguese.”

The secret of Inoue’s prodigious output? Prodigious work. The  same secret practiced on a daily basis by all phenomenally successful writers.

Inoue reckons the creative process as “98% sweat, 1% talent and 1% luck." He has been known to finish a 200-page story—bang-bang westerns are his favorites—at a single sitting. (I assume  brief breaks, unless he’s catheterized.)

I mentioned in that earlier post that the late Isaac Asimov could write about as fast as he typed, which for him was 80 words a minute. Inoue may write even faster. According to one testimonial on his website, “Many people cannot read at the same speed that he writes.”

He is singlehandedly feeding hundreds of thousands of Brazilian readers--with a literary diet heavily weighted toward Westerns. A favorite by-line is "Tex Taylor." On his travels, Inoue, himself, has not been much farther into the American west than the West Side of Newark, NJ.

I'm reminded of Karl May--“a [German] adventure writer from the late nineteenth century whom most Americans have never heard of but whose stories of the American West are to this day better known to Germans than the works of Thomas Mann. His books have sold more than a hundred million copies.” ("Why do cowboys and Indians so captivate the country?" by Rivka Galchen. New Yorker, April 9, 2012

Among Karl May's hordes of youthful admirers were two boys destined to change the world--Adolf Hitler and Albert Einstein.