(I can’t imagine my life absent the inspiring magic of good stories and good storytellers. In fact, this blog is largely devoted to making an appropriate fuss over the yarn-spinners of yore. Through periodic author interviews, I also celebrate contemporary practitioners of this most magical of arts.--Dan Pollock) 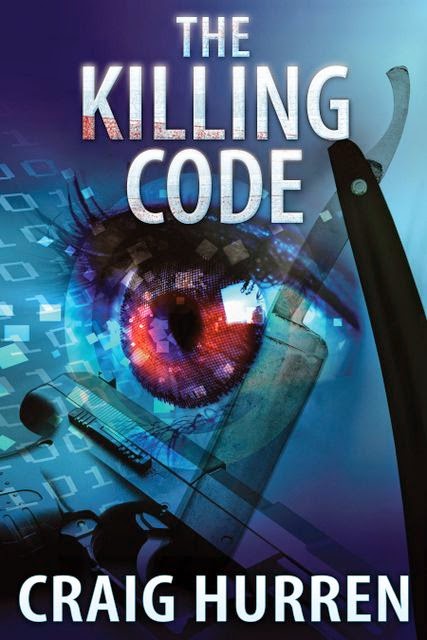 What would make a successful pharmaceutical executive suddenly try his hand at writing a techno-thriller? Well, as you’ll discover in the lively Q&A exchange below, storytelling was Craig Hurren’s first love, but one that had to take a back seat—for several decades—to the exigencies of earning a living.

But when he finally got around to it, his imaginative gifts, work ethic and wide-ranging expertise in technical areas resulted in a smashing debut thriller, THE KILLING CODE.

In the year since its release, Hurren's book has appeared on many Amazon Kindle best-seller lists. And I'm not surprised. It’s a read I wholeheartedly recommend. From the first chapter THE KILLING CODE accelerates like the latest-generation roller-coasters, and the whipsaw turns just keep coming!

How exactly did a pharmaceutical executive manage to launch a successful second-stage career as a thriller writer, and what lessons has he learned in the process? For the answers to these and other questions, let’s cut to the chase—my interview with Craig Hurren:

D.P.: There are shocks and surprises at the end of almost every chapter of THE KILLING CODE. Did you plot the story carefully in advance?

C.H.: I wish I was a planner, but I’m afraid it’s just not in my nature. I write spontaneously, then, if necessary, go back and fix anything that doesn’t fall into place properly. I know most authors will think my methodology impractical or worse, but that’s just what works for me. The great thrillers I grew up reading always had a hook at the end of each chapter, so that’s the style I like to use in my writing. Sometimes it’s not easy, but I firmly believe authors must give readers a compelling reason to move on to the next chapter. As a reader, I don’t like the modern approach of extremely brief chapters that end with no hook.

D.P.: THE KILLING CODE is apparently your debut thriller, but, frankly, it’s hard to believe it’s a first attempt at long-form fiction. When did you first get the urge to tell stories?

C.H.: Coming from such an accomplished editor and author as you, I consider that a real compliment – thank you, Dan! I guess I’ve always been a storyteller. When I was young, people used to love hearing me tell jokes – I was very good at mimicking accents and voices, so I’d draw the stories out to make a show of it. I enjoy entertaining people. I knew I wanted to write a book when I first read the late, great, Campbell Armstrong’s JIG. That was a real inspiration to me, and it was that experience, thinking back, that really got me started enjoying books. Of course, life is what happened while I was busy making other plans, so it wasn’t until about thirty-five years later that I finally put fingers to keyboard. It was a very interesting process, and thoroughly fulfilling to have accomplished something I’d dreamt of so many years earlier. If that writing bug is in you, I recommend you let it loose!

D.P. To get specific, you’re not simply a thriller writer, but a techno-thriller writer, and one who demonstrates an impressive command of weaponry, law enforcement, martial arts, etc. Without giving away trade secrets, how do you keep current in all these areas?

C.H.: I’m very fortunate to have a good number of close friends who have served in elite military units, and others who’ve worked in the more concealed services. When I can’t find enough information on the Internet, or through other means, they are happy to help with technical advice on application, usage, suitability, etc. of weaponry. For the martial arts components, I’ve studied several different forms since I was quite young, so I can improvise fairly well from my own knowledge and experience. Also, as a longtime executive in the healthcare industry, I have broad and intimate knowledge of most things medical and many things technical.

D.P.: Who are your favorite thriller (and techno-thriller) writers?

C.H.: As I said, Campbell Armstrong was very influential for me, and my other favorites are Clive Cussler, Tom Clancy, Vince Flynn, Robert Ludlum, and Robert Crais. There are many more I enjoy, but those are my go-to guys. Unfortunately, we’ve now lost several of these greats; looks like I’ll have to find some new ones.

D.P.: What books are you reading now?

C.H.: I’m sorry to say that other matters have been taking most of my time lately, so I’ve done precious little reading. I started a feisty and fun little number called, LAIR OF THE FOX, and was enjoying it very much, until the demands of life took me away from it temporarily. I’ll get back to it soon.

D.P.: As LAIR’s author, I have to insist you keep your word on that, or I’ll have to stop touting it as a “can’t-put-it-down” book. Next question: Do you have a set time to write each day?

C.H.: Until such time as I become independently wealthy, that is completely impractical for me. When I write, it usually happens in spontaneous, sporadic frenzies.

D.P.: How much time do you allot to marketing?

C.H.: I’m rapidly coming to the conclusion that I spend far too much time on marketing. It seems most efforts are minimally effective at best, and some are just plain futile. As the majority of independently published authors are well aware, book marketing is an extremely frustrating game. I’ve been fortunate enough to have sold over 13,000 copies of THE KILLING CODE so far, but let’s face it – that will not pay the bills. I should take the advice of wonderfully successful authors like Russell Blake and Jake Needham, who have both told me on more than one occasion to just keep trying and “write more books.” As most writers know, that’s easier said than done for most of us, but it is very sound advice.

D.P.: As of this writing, THE KILLING CODE has 74 reviews on Amazon, most of them 5 stars. Aside from obviously writing a crackerjack thriller, do you have any tips for indie writers on getting reviewed?

C.H.: Ugh, the dreaded review-getting question. Obviously my first few reviews were from friends and family, but no one has enough of those to make an impact. I still remember my first review from a total stranger like it was yesterday. It was only about two weeks after I launched, and it came like a bolt out of the blue. What a thrill – someone I’d never met had read my work, and liked it so much they gave it a 5-star rating and glowing review. I was over the moon!

Anyway, back to the question: I’m afraid I have no real answer for you. I’ve heard of authors paying PR companies for stacked reviews, and other forms of skullduggery. Some will trade reviews with other authors, but I know of no legitimate or effective way to induce unknown readers to rate and/or review a book. As I said, I’ve sold more than 13,000 copies of THE KILLING CODE, yet I only have 74 reviews on Amazon USA, 9 reviews on Amazon UK, and 49 ratings with 20 reviews on Goodreads. Those numbers make no sense to me at all, but there you have it. We all love hearing from our readers, but if you think about it, writing a review is an unnatural act for the vast majority of readers. They don’t buy a book thinking they’ll have to publicly express their opinion on the work. Before ebooks, the general public bought books from bookstores, and if they had a specific opinion about any title, they would have a conversation with friends or family about it – not splatter their inner thoughts all over the Internet. Some folks enjoy doing that, and we appreciate it, but in my humble opinion, most readers prefer to remain just that.

D.P.: Do you write in public (Starbucks, say) or strictly in private?

C.H.: I finally got rid of my massive and extremely powerful desktop computer in favor of a laptop – partly for that very purpose. Strangely enough, the laptop hasn’t left my desktop since I got it over eight months ago. So the answer is no, apparently I’m not a public writer.

D.P.: Do you jump around in your narrative or write straight through?

C.H.: I generally try to write straight through, but sometimes a bit of exposition is necessary. Backstory can be annoying, but since writing in a present timeline excludes previous events, readers need knowledge of certain events and history to understand character traits, motivations, etc.

D.P.: An obvious final question: Is there a sequel in the works?

C.H.: Yes! I’m currently on chapter 9 of THE KILLING CHASE and very happy with it so far. I’ve learned a great deal from my first book and all the wonderful people I’ve met through the experience. I believe my style and dialogue have improved – I just wish I could do something about the speed! ;-)

Thank you kindly for interviewing me and your interest in my work, Dan.

D.P.: Thank you, Craig! I can’t wait for THE KILLING CHASE to begin…

*
THE KILLING CODE (from the Amazon book description):
Detective Alan Beach discovers a tenuous connection between the apparent suicide of a prominent scientist and the assassination of a US Congressman. The suspense builds as he struggles to uncover the truth. When a team of mercenaries tries to permanently silence him, a mysterious figure intervenes. Beach and his deadly new protector discover a dangerous conspiracy running far deeper than they imagined. In this must-read thriller, the race is on to stop one of the most powerful business moguls in America from assuming the role of puppet-master over the entire nation.

“THE KILLING CODE has a great premise, deft plotting, and a rock-'em-sock-‘em ending with a twist in the tail. Heck, what's not to like?”—Jake Needham (best-selling crime-fiction novelist)

About Craig Hurren:
Craig Hurren has amassed many years of experience as an executive in the pharmaceutical and healthcare industries. A long-held passion for thrillers has driven him to aspire to the ranks of his favorite authors, such as: Campbell Armstrong, Clive Cussler, Vince Flynn, Michael Crichton, John Grisham, and others. His clear and concise style, brisk pace, clever plot twists, gritty imagery and crisp action sequences reflect his interest in these masters, and his knowledge of medical technology makes his stories relevant and the science highly realistic.