GREAT STORYTELLERS AND HOW THEY HATCH THEIR PLOTS

In an earlier post (“The Way We Were” -- April 7, 2013), I mentioned two historical novelists of an earlier era, Joan Grant and Taylor Caldwell, both of whom seriously asserted that they got their ideas from their own past lives. Barbara Cartland, one of the all-time best-selling authors (a billion books, according to Guinness), used to recline on a chaise lounge in her darkened study and dictate by the hour to a
silent amanuensis. From these productive séances, swoon-and-swashbuckling novels issued forth at the rate of one every fortnight. (Ms. Cartland, however, was at one point accused by novelist Georgett Heyer of plagiarizing her own historical romances, including actual character names and traits).


Seances and past lives aside, we’re all novelists in our dreams, weaving disparate elements together in fantastical ways. Writers are well advised to keep a bedside pad and pencil for use in retrieving their fast-fading subconscious memories upon first awakening. Such scribblings often prove worthless, true; but many thorny plot problems have been solved thus; indeed whole sagas have been sketched out. Robert Louis Stevenson famously awoke with Jekyll and Hyde complete in his mind and proceeded to transcribe it as swiftly as he could.


John D. MacDonald’s son recalled a family member once asked his Dad if, having written so many books and so many stories, he would have enough material to keep going. MacDonald replied that when he lay down at night “the stuff just spilled out of his ears.” (From JDM Bibliophile, Issue 54, p.2)

In another interview, MacDonald explained his story-formation process: “You’ve got a big cauldron in the back of your head, like a big bubbling stew, and everything that’s ever happened to you is in there, everything you’ve read, seen, touched or believed—everything is in that cauldron. When two things can be related, then they sort of, let’s say, agglutinate and float up to the top of the stew where you can skim them off, and wow, there’s an idea.” (Interview in Family Weekly, May 5, 1985, about a year and a half before he died.)
Twenty years earlier novelist and screenwriter C.S. Forester described his own story gestation process in almost identical terms. This lengthy quote is taken from The Hornblower Companion, which is one of the best extended essays on the writing and the creative process I’ve ever come across:

“There are jellyfish that drift about in the ocean. They do nothing to seek out their daily food; chance carries them hither and thither, and chance brings them nourishment. Small living things come into contact with their tentacles, and are seized, devoured, and digested. Think of me as the jellyfish, and the captured victims become the plots, the stories, the outlines, the motifs—use whatever term you may consider best to describe the framework of a novel. In the ocean there are much higher forms of life than the jellyfish, and every human being in the ocean of humanity has much the same experience as every other human being, but some human beings are jellyfish and some are sharks. The tiny little food particles, the minute suggestive experiences, are recognized and seized by the jellyfish writer and are employed by him for his own specialized use.

“We can go on with the analogy; once the captured victim is inside the jellyfish’s stomach the digestive juices start pouring out and the material ins transformed into a different protoplasm, without the jellyfish consciously doing anything about it until his existence ends with an abrupt change of analogy.

“In my own case it happens that, generally speaking, the initial stimulus is recognized for what it is. The casual phrase dropped by a friend in conversation, the paragraph in a book, the incident observed by the roadside, has some special quality, and is accorded a special welcome. But having been welcomed, it is forgotten, or at least ignored. It sinks into the horrid depths of my subconscious like a waterlogged timber into the slime at the bottom of the harbor, where it lies alongside others which have preceded it.

"Then, periodically—but by no means systematically—it is hauled up for examination along with its fellows, and, sooner or later, some timber is found with barnacles growing on it. Some morning when I am shaving, some evening when I am wondering whether my dinner calls for white wine or red, the original immature idea reappears in my mind, and it has grown. Nearly always it has something to do with what eventually will be the mid-point of a novel or a short story, and sometimes the growth is towards the end and sometimes toward the beginning. The casualty rate is high—some timbers grown no barnacles at all—but enough of them have progressed to keep my actively employed for more than forty years.

“Examination completed, the timber is dropped back again into the slime, to be fished out every now and then until the barnacles are found to be quite numerous. That is when the plot is really beginning to take shape; that is when the ideas relating to it recur to me more and more often, so that they demand a greater and greater proportion of my attention as the days go by, until, in the end, the story might almost be described as an obsession, coloring my thoughts and influencing my actions and my behavior. Generally some real work is called for at this stage, to clear up some mechanical difficulty. At some point in the plot it may be essential for the Lydia and the Natividad to be at the same place at the same time—what forces (other than pure coincidence) can bring this about? What has happened earlier that makes it quite inevitable? A different kind of inventiveness has to be employed here.

“This sort of difficulty is sometimes cleared up in a peculiar and often gratifying fashion—I have known it to happen half a dozen times. I have been developing two different plots, both of them vaguely unsatisfactory, and then suddenly they have dovetailed together, like two separate halves of a jigsaw puzzle—the difficulties have vanished, the story is complete, and I am experiencing a special, intense pleasure, a glow of satisfaction—entirely undeserved—which is perhaps the greatest reward known to my profession." (Hornblower Companion, pp. 95-96)

Some years ago, in preparing to teach a 10-week course on Thriller Writing at UCLA Extension, I exhumed these two treasured quotes on story formation to share with my students. Then, casting about for supporting ideas, I came upon this uncannily similar one from horror maestro Stephen King:

Tom Clancy, the creator of the techno-thriller, frames the same creative process in explosive terms: “It just happens. Sometimes I’m walking to the mailbox, taking a shower, driving my car—and kaboom! I get an idea." (Washingtonian, January 1989) 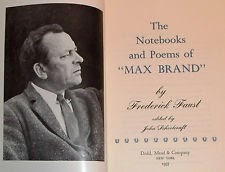 Another plotmeister, Frederick Faust (who cranked out westerns under the pen name Max Brand), passed along one of the little tricks he used to hatch a “new” plot: “When you read a story, pause when you are halfway through; finish the story in detail out of your imagination; write it down in brief notes. Then read the story through to the end. Often you find that you have a totally new final half of a story. Fit in a new beginning and there you are." (Robert Easton’s biography, Max Brand: The Big Westerner,  p. 219-20)


And elsewhere in Easton’s biography (p. 219): “[Faust] recalled that when he started doing stories each seemed the last he could find. But then by degrees his story-finding faculty had increased. ‘You spot stories in the air, flying out of conversations, out of books.’ Stories also arise, he said, out of the inversions of things as you find them. ‘You sit at the rich man’s table; well, what if he were broke and this were the last time he could entertain? Or suppose the beggar suddenly inherits wealth? Or what is it that the Texan finds most non-Texan?’”
Posted by Dan Pollock at 1:38 PM No comments: