TO PLOT OR NOT


When it comes to plotting a novel, there are two basic approaches and, thus, two kinds of writers. There are the naturals, the seat-of-your-pants folks who “just do it.” Their stories “just grow’d,” like Topsy in Uncle Tom’s Cabin.
Then there are the rest of us, writers who, like me, need to build an elaborate track and know exactly where they’re going, or they end up nowhere. Or stranded, at some accidental and inconclusive terminus.

That’s happened to me—especially during the long, frustrating years of my apprenticeship—more times than I want to count. In my garage are stacks of cardboard boxes full of false starts and miscarriages, some of them hundreds of pages long. There’s even some good writing in those fragmentary projects, but so what? It’s all overdue for the recycling bin.

But what about the “naturals”? How does yarn-spinning work for them?


The world recently lost one of these naturally gifted storytellers, Elmore Leonard, a writer who never outlined or plotted in advance.  Here’s how he once explained his process:
“Most thrillers are based on a situation, or on a plot, which is the most important element in the book. I don't see it that way. I see my characters as being most important, how they bounce off one another, how they talk to each other, and the plot just sort of comes along.”

In fact, “Mr. Leonard is so comfortable allowing his characters to control the pace and action of his stories that he didn't know how Bandits would end until three days before he finished it.” (Elmore Leonard quoted by Michael Ruhlman, New York Times Book Review, Jan. 4, 1987)

This approach is usually described as character-driven, as opposed to plot-driven. Another best-selling crime writer, Joe Wambaugh, places himself emphatically in the character-first camp beside Leonard:

“I sort of relegate plot a little bit down on the list of importance in my mind. I don't really have an outline when I start a book. If I did, it wouldn't be any good. I create characters and, if you're really cooking, they take over. They direct you. You follow them.” (Joe Wambaugh interviewed in the San Diego Reader, Nov. 4, 1993)

I remember reading about Robert E. Howard, a pulp-magazine writer back in the ‘30s who famously created Conan the Barbarian. Howard had scant success with his adventure yarns until one day, as he recalled, he had this overpowering vision of a big, musclebound, wild-eyed barbarian dude. The visitation drove Howard to his typewriter; and, from then on, the stories just flowed—and sold.

I love these examples, and I love the mystic process of being possessed by characters. But it rarely works that way for me. I'm more like Stephen King, at least in this one regard:

Of course, most writers, including me, have experienced to some extent both kinds of writing—switching back and forth, as it were, from left brain (plot-analytical) to right (character-synthetic). The great novels of Charles Dickens are indelibly character-driven. His unforgettable players come alive on the stage of the reader’s mind and drive the story forward, installment after installment. And yet, before launching on each new book and letting his conjured creatures consume him, Dickens would scribble cryptic notes—names and places, touchstones and benchmarks—for the great narrative journey that stretched ahead.

I suspect that even sly old Elmore Leonard had an inkling of where he was letting himself be led. John D. MacDonald, whom I have quoted so often in past posts, once described a novel-writing process that sounds to me like a hybrid between plot-and-character driven:

"He explained that he never plotted in advance, but let the story form itself as he wrote. Story elements, he said, were in a kind of hopper tapering down to a point where they came out. If you tried to grab them all at once they'd jam, but if you picked them out one by one they'd come in proper sequence." (MacDonald paraphrased by Walter Sheldon, "Plotting the Novel," 1973 Writer's Yearbook)


So—to plot or not to plot, that is the question. It would seem there are two equally valid answers. But for me, alas, there is only one.

Up top I described myself as one of those “who need to build a track and know exactly where they’re going, or they end up nowhere.” A writer friend of mine put it this way: “Learning to write is track-laying. Writing is running on the track. What people are always trying to do is run without a track.”

In subsequent posts, I’ll talk about how I eventually learned to lay that story track. The learning process, for me, was methodical and laborious, but utterly essential, lacking as I did (and still do) that unerring narrative gift or instinct with which some writers are so wonderfully endowed. And, as I say, careful plotting is still essential for me, all these years and novels later. Novel construction has not gotten noticeably easier. Each new project I undertake, like the building of a house, requires careful blueprinting and frequent piece-by-piece inspections to assure solid story structure with satisfying character trajectories, plot tendencies, resolutions, declining action and so forth. 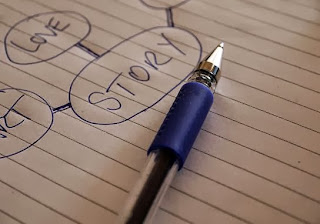 And I suspect I’m not alone in my predicament. So, if you are like me, stay tuned to this space as I pass along some hard-won tips on plotting, from short stories to long-form novels.
Posted by Dan Pollock at 11:22 AM 5 comments:

THE RUNNING BOY FEATURED ON KINDLE BOOKS AND TIPS BLOG

Self-Promo Dept Update: THE RUNNING BOY is a featured title on today's Kindle Books and Tips blog  ; once there, please just scroll down to the first book cover (after the boxed set).

The Kindle Books and Tips blog has been ranked the #1 blog in terms of paid subscriptions in the Amazon Kindle store since 2010, and is consistently ranked in the Top 100 for all Kindle titles week in and week out. If you would like to have the blog’s posts sent to your email, you can subscribe here.
Posted by Dan Pollock at 12:01 PM 1 comment: