A GOOD WRITER WHO KEEPS GETTING BETTER

I’ve been a fan of T. Jefferson Parker since his 1985 best-selling debut splash with Laguna Heat. A fan and an admirer at the way he has steadily carved out his own distinctive niche in the SoCal mystery scene.

But I’ve had issues with Jeff, too—mainly teeth-grinding jealousy. See, I grew up in Laguna Beach (several decades before he arrived) and always figured I’d write the definitive Laguna mystery… someday. So much for fatuous daydreams. Jeff beat me to it—and kept right on going, while I’ve suffered from chronic novel-writing interruptus. 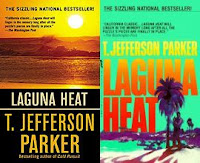 Yesterday at Vroman’s Bookstore  in Pasadena I got a chance to say hello to Jeff again and congratulate him on his latest, his twentieth mystery novel, The Famous and the Dead. As trumpeted on the book’s jacket, the novel represents “The explosive conclusion to T. Jefferson Parker’s New York Times bestselling Charlie Hood series.”

In the more considered judgment of Jeff’s editor, The Famous and the Dead “might just be perfect.” This, at least, was the emailed verdict Jeff received in lieu of the editor’s customary pages of detailed notes on ways the story might be improved.

“What do you think?” the editor’s email ended, after apologizing for not finding any flaws in the work.

“Well, maybe so,” Jeff emailed back after thinking it over. He’d been braced for his usual intensive rewrite, but realized that, like the editor, he couldn’t think of any way to make the book better. “For what it is,” he told us at Vroman’s in his unassuming way, “I think it’s about as good as it can be.”

It’s never easy to write a good novel, let alone a “perfect” one. And the ending of this one was a particular challenge, he said, since The Famous and the Dead was the finale of the six-book series. There were more than a few loose ends, both accidental and deliberate, from the five previous Hood books, Jeff said. More significantly, like J.K. Rowling reaching closure on her magical saga with Harry Potter and the Deathly Hallows, Jeff faced the daunting task of giving each of his main characters an appropriate final scene or curtain call. He also wanted to make sure each character got what he or she “deserved.”

Endings are always a big challenge, Jeff said. “I don’t like ambiguous endings. Like when people say, ‘Well, what do you think happened?’ To me those are always kind of a copout.”

The novelist’s challenge is to satisfy all story tendencies and meet all reader expectations, so that the coda, when it arrives, resounds with finality and inevitability. Like that old song lyric, “That’s all there is, there ain’t no more.” Or, in the more elegant words of Robert Frost: “The end implicit in the beginning but not foreknown.”

Before Jeff got around to signing copies, I asked him if he felt a sense of loss after saying goodbye to characters who’d been with him so long. I was thinking of Dickens who reportedly was almost inconsolable after closing the book on Copperfield; or theatrical wrap parties where actors celebrate a long and successful run, then go their separate ways like a family dispersed.

“Yes,” Jeff said. “I do miss Charlie Hood [and the others]. I mean, they’d been my daily companions for six books and six years of my life.”

The good news is, especially for any who have not yet sampled the Charlie Hood series, T. Jefferson Parker’s whole rowdy cast of characters is waiting to gather again for your reading pleasure. It starts with L.A. Outlaws.