I CRY FOR YOU, VENEZUELA...

...But certainly not for Hugo Chávez, or Chavismo. I leave that to Sean Penn and Oliver Stone. And apparently the Los Angeles Times, which featured the following banner caption beneath the dead dictator’s pugnacious portrait on page 1 this morning:

Now let me add that I had high hopes for Chávez when he muscled his way to power in the early ‘90s, in the aftermath of the impeachment for corruption of President Carlos Andrés Pérez... and not long after my wife and I visited the country to research a thriller novel.

As the years passed, and the familiar Man on Horseback galloped into the headlines, my hopes were dashed, and so were Venezuela’s… yet again.

Now back to that thriller novel, which I titled Orinoco, but which my publisher (Pocket) oddly retitled Pursuit Into Darkness.  It was supposed to be action adventure, but it kept turning into glorified travelogue because, well, because Venezuela is one of the most incredibly beautiful places on earth.

Here’s a quick sketch from chapter two of my book: 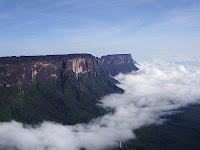 “He felt the familiar pull of the land itself, of the frontier, something Venezuela embodied for him more than anywhere else on earth. Its cities were jumping-off places for outrigger islands and Andean peaks, rain forests and rolling grasslands, jungle rivers and breathtaking waterfalls, and a vast highlands studded with giant sandstone mesas. Its cornucopia of resources included one of the world's largest deposits of oil, plus diamonds, gold, silver, iron, bauxite, manganese, coal and hydroelectric power--the modern fulfillment of the El Dorado dream that had once lured Sir Walter Raleigh to the region."

Among my inspirations was Conan Doyle’s The Lost World, though I skipped the dinosaurs that Doyle’s imagination deposited atop Auyán-Tepui, the "giant sandstone mesa" from whose prow Angel Falls plunges endlessly down into the surrounding jungle).

But the passage from Pursuit could also serve as the setup for a standard Venezuelan joke, one I heard from a native guide from Ciudad Bolívar who drove me across hundreds of miles of the La Gran Sabana:

“So God, he amuses himself by putting all this incredible natural wealth and beauty into this one small country. But then he plays an even bigger joke—he gives it all to Venezuelans.”

Meaning—alas—that nothing will come of it. Because Venezuelans can’t agree on anything. 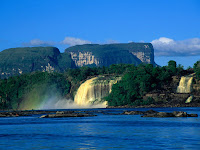 Maybe the next guy will do a better job down there. Please, God, let it be so. I’m tired of your joke.

*For a far less addlepated assessment of the late, unlamented Venezuelan strongman, I recommend today’s editorial in the Miami Herald, "Venezuela’s Hugo Chávez and his legacy of plunder":

A few excerpts: “…as a national leader, he was an abject failure who plunged Venezuela into a political and economic abyss… In an energy-rich country that once knew no blackouts, electrical shortages are frequent, the result of Mr. Chávez’s plundering of the country’s public oil company. In a country that once enjoyed a thriving free market, prices are controlled and food items often scarce…Venezuela has become one of the most violent countries in the world, with nearly 20,000 murders recorded in 2011.”