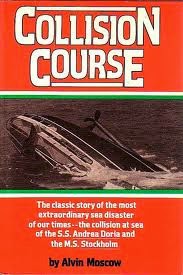 I remember as a boy reading a gripping account of the 1956 collision of two passenger ships off the coast of Nantucket, the Andrea Doria and the Stockholm. The book, Collision Course, was a best-seller, and deservedly so.

The author, Alvin Moscow, told his tale in a straight-ahead journalistic style (he was a former New York Times and AP reporter), shifting from ship to ship, bridge to bridge, explaining the fateful decisions, or nondecisions, that led up to the disaster.*

(* In doing so, Moscow was likely following the blueprint of Walter Lord’s best-selling Night to Remember, which details a more famous maritime collision, between the RMS Titanic and a Newfoundland iceberg. Night was published just a year before the Andrea Doria-Stockholm tragedy.)

Ever after, the phrase “Collision Course” was mated in my mind with Alvin Moscow’s riveting tale. 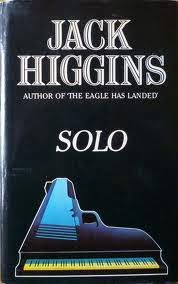 Flash forward many years. I was wandering the bookstalls of London’s Heathrow Airport looking for a paperback to help pass the 11 airborne hours from London to Los Angeles. I settled on a Jack Higgins thriller titled Solo about a concert pianist who moonlighted as a contract assassin. Seriously.

The choice was good. The pages turned in tandem with the great globe below, and Higgins’ climactic finale arrived just as we dropped into the LAX glide path.

What made Solo such sure-fire fun for me was the fact (obvious from chapter two) that Higgins had crafted a classic collision course story. Chapter one introduced the lethal virtuoso. Chapter two brought on a special forces bloke charged with hunting him down. Hero and antihero, both top-drawer assassins. And, as simple as that, the “game was afoot,” as Holmes would say. In reading terms, the hook was set and I was happily being played by an old pro. 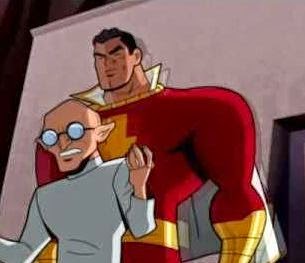 Of course I’d read, and watched, the collision course formula applied a thousand times before, on TV, in movies and stories. Holmes vs. Moriarty, Superman vs. Lex Luthor, Captain Marvel vs. Dr. Sivana, Batman vs. the Joker, North vs. South, Cavalry vs. Indians. And in a thousand action movies—boxing, samurai, spy vs. spy, even understudy vs. leading lady. Always the formula worked, but it never coalesced in my mind as a story structure until Higgins’ Solo. When it did, it turned on a lightbulb thought: “I want to write one of these!”

Owen Wister, an Easterner and Harvard classmate of Teddy Roosevelt, is generally credited with creating the western novel—and the iconic western hero. His “Virginian” (played by Gary Cooper in the 1929 film) was the fully fleshed prototype of all those rangy, rough-hewn paragons later enshrined in the works of genre masters like Zane Grey, Max Brand, Luke Short, Ernest Haycox and Louis L’Amour.
More to my point, Wister’s 1902 novel also contained a series of recurring and escalating duels between hero and antagonist—the Virginian and Trampas—each time with higher stakes until the final showdown, which marshaled all the signature elements of High Noon.

A collision course story, The Virginian, if ever there was one. 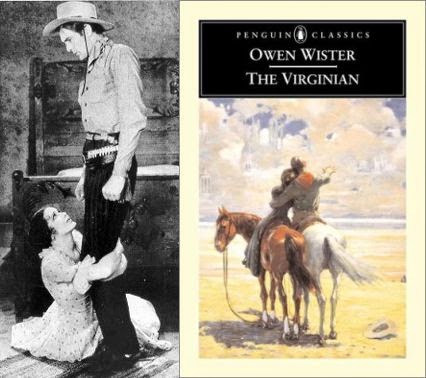 My turn at bat came years later, after a surprising run of good reviews for my first novel, Lair of the Fox. Publishers were suddenly interested in me. What was my next book? they wondered.

I didn’t have one. So I thought of Higgins and Wister. Why not update that plot, two guys on a Cold War collision course? White hat vs. black hat. Better yet, have them switch hats, defect to each other’s country. Cossack vs. Cowboy. Pitted against one another in a series of escalating showdowns, each time with different weaponry, all laid out in easy-to-follow symmetry, chapter by chapter.

A plot came together swiftly in my mind, set against a high-stakes political backdrop. I wrote a 10-page synopsis, followed by a 10-page sample chapter, and shot it off to my impatient agent.

That brief proposal, which would eventually culminate in DUEL OF ASSASSINS, was (and still is) the single most lucrative piece of writing I have ever produced. Those 20 pages landed me a two-book contract that exceeded even my fantasies. (Reverses of fortune in my writing career were lurking not far down the road, but that’s another story.)

I had the idea, I had the contract. I only had to write the book. Not a small matter. So I set to work. Well, not really. I quit my job and set off on a research trip. 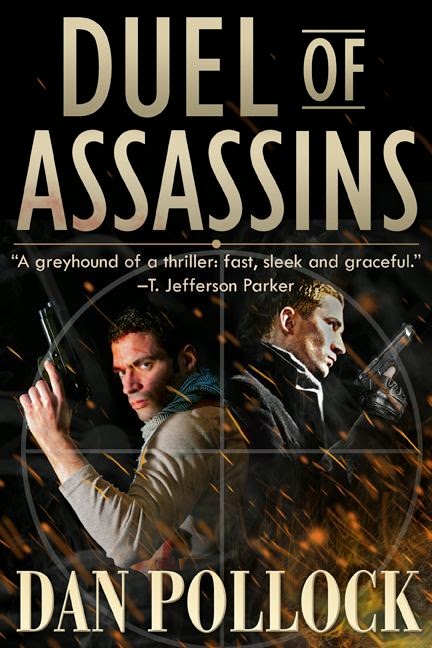 But eventually it got written. More than a year later, I was able to hand an advance reading copy to a colleague, best-selling mystery writer T. Jefferson Parker (see my blog post, “A Good Writer Who Keeps Getting Better”) and ask him if he’d be willing to read it and maybe give me a quote.

“Tell me one thing,” Jeff said, staring at my title, Duel of Assassins, “does it contain an actual duel?”

“Yes,” I was able to answer, “with fencing masks and sabers, and described play-by-play from en garde to touché.”

Jeff’s generous quote appears on the cover of the current ebook edition, just out on Kindle. To read it, and all the many words that follow inside, I invite you to click on this Duel of Assassins link and give it a download.